We’ve all seen ads in our Facebook feeds and our Google searches, but what’s the difference between them?

END_OF_DOCUMENT_TOKEN_TO_BE_REPLACED 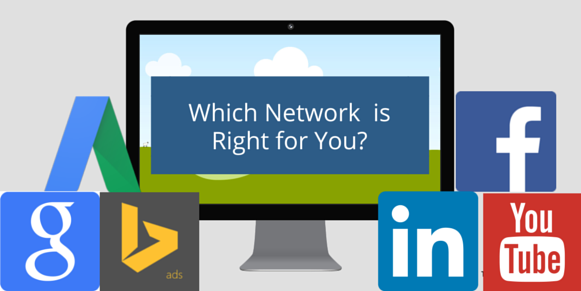 It’s difficult advertising online. It can be a struggle to find the right PPC ad networks. You have questions. What are the strengths and weaknesses of Google Ads? We’re here to help.

We will take advantage of Vantage’s experience in the PPC world to explain the strengths and weaknesses of some of the most popular online PPC ad networks.

By the end, you will have a strong understanding of which online PPC ad networks are right for you.
END_OF_DOCUMENT_TOKEN_TO_BE_REPLACED

The team at Vantage was invited to Clio’s 5th anniversary event. Clio is the leader in cloud-based management tools for the legal industry and one of Vantage’s PPC clients. Part of the festivities was the announcement that they will be opening a new office in Ireland.

Hopefully we will get the invite to their new office in Ireland one day…If it is anything like their Burnaby office it will be spectacular!

At the event I also got to see their new iPhone app:

Earlier this week, on their official Canadian blog, Google announced its new Google Partners program.  The main goal of the new Partners program is to “[bring] together [all of Google’s] existing programs under this new platform, making it easier for agencies to access Google resources, training, and support all in one place.”

What the new Google Partner Program Means for Agencies

Agencies and web professionals will be able to do all of the following in one place:

The new program is not just about consolidating Google’s existing programs.  Here are a few of the addition changes I have noted so far:

What the new Google Partner Program Means for Businesses

Using the new, simplified Google Partner Search, you can connect with a trusted agency that has been verified by Google as helping their customers and using the latest best practices. You can also identify Google Partners by the Partner badge displayed on their website.

However, I can share my experience about actually being in the Google office. The Google Toronto office is fully equipped with an outdoor mini-golf course, candy bar, cafeteria and zombie artwork to keep the creative juices flowing…Not only that the event was fully catered, featuring mini-burgers with mini-mugs of Guinness among other things…

Here are just a few photos from inside: 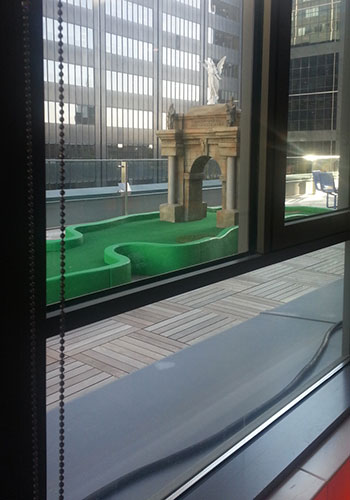 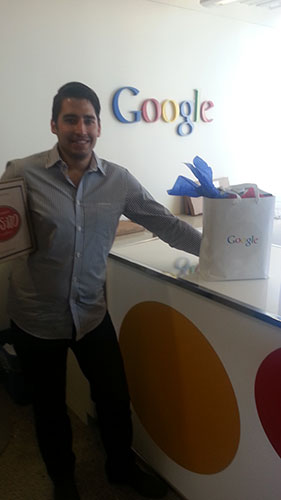 Steve picking up some loot

Google has made the one of the largest updates to Google Ads in its recent history. The update will allow advertisers to target multiple devices and locations from a single “enhanced” campaign much more easily. This is all part of Google’s long term initiative to make Google Ads easier to use for small businesses. The only problem with simplifying Google Ads is that it usually comes at the expense of control. A loss of control is bad for agencies and also for the user because it becomes more difficult to show the most relevant adcopy possible. Below I will outline the changes and what the implications will be.

What Are Enhanced Campaigns

Enhanced campaigns will allow a single campaign to target users by device, location and time of day differently. For example, the same adgroup could serve you a desktop ad when you are on your computer at work and then serve you a mobile specific ad when you’re on your iPhone during your lunch break. In theory, this should prevent people from having to build out campaigns for each device and location.

One of the biggest changes will be the use of bid multipliers to set your bid. Bid multipliers will allow you to bid differently based on device, location and time of day. All starting bids will be based off of your desktop bid, which means you must run ads on desktop.

Another smaller change is that they are going to lump Desktop and Tablet users together.

Why Are Enhanced Campaigns Coming Out

From the mobile side of things, Google reported the following reason for moving to Enhanced Campaigns:

“People are constantly connected and moving from one device to another to communicate, shop and stay entertained. In fact, a recent study of multi-device consumers found that 90% move sequentially between several screens to accomplish a task.”

What this really means is that advertisers need to run both mobile and desktop ads because it is the same user trying to accomplish the same task. The problem before, was that small businesses didn’t have time to create mobile only adcopy, so they just ended up running the same adcopy for both mobile and desktop users. This provided a bad user experience for people searching on mobile devices and a bad conversion rate for businesses. So Google set off to fix this by making it easier to create mobile adcopy from within the same campaigns as desktops and thus the Enhanced Campaign was created.

Another less obvious reason that Google may be trying to make mobile more accessible is for financial reasons. Over the past few years, the average CPC has been decreasing because of the increase in mobile device clicks. Mobile device CPCs are typically a lot lower than desktop due to a lack of competition. By making mobile more accessible to small businesses it will create more competition and drive up the CPC.

What Problems Do Enhanced Campaigns Create?

Here are just a few of the major issues we see with the new Enhanced Campaigns:

Start testing Enhanced Campaigns by only switching over 1 campaign at a time. Then once you get the hang of things switch all campaigns over.

It seem like almost every week we get an inquiry from a company that is interested in SEO services and website conversion optimization but not initially interested in running Pay-Per-Click. There’s by no means anything wrong with this, but a consistent problem that we are presented with is that most of these companies’ websites receive far too little traffic to get high-quality, actionable keyword data for SEO, or to be able to do website conversion optimizations based on any statistical significance.

If we were to only provide SEO services to these clients, the limited data available would make optimizing for SEO a long drawn out process with website traffic gradually increasing over time as organic search rankings improved.

What most of these clients, and many companies that only provide SEO don’t know, is that running Pay-Per-Click is the secret to getting a head start in SEO.

There are too many elements from PPC that we include in our SEO strategies to mention so I’ll just go over the big picture:

With PPC we are able to instantly increase traffic to a website. Right away we are able to show client’s ads high in search engine results and bring in new customers.  Website traffic and conversions pour in along with that high-quality, actionable keyword data for SEO that we’ve been looking for.

PPC accounts are an SEO keyword gold mine! We get access to data that tells us exactly what users are typing into search engines that result in purchases from the client’s website!  With PPC we are able to optimize our SEO for traffic and conversions based on statistically significant data.

For some great info on how to leverage PPC data for SEO, check out this post by Tom Demers.

You might have noticed that Google’s search engine results page has been changing a lot lately. Everyday it seems there’s a new change or new addition. It’s even quite possible for you to see a new feature one day only to come back the following day and it is no longer there.

Having trouble keeping up?

Google Ads is quite similar in that it’s always changing.  If you don’t live and breathe PPC then it’s just not possible to keep up with the number of changes and improvements that are made to Google Ads on a daily basis.

Although many of these changes come as a blessing to professional PPC managers, they hardly ever have positive outcomes for amateurs with neglected accounts. At the very least, with a neglected Google Ads account you are missing out on new opportunities that your competitors are taking advantage of and you’re account performance is declining because of the improved competition.  While many small changes and missed opportunities mostly result in a steady decline in account performance, big changes that occur more frequently than you’d think cause neglected accounts to go completely haywire and waste thousands and thousands of dollars in no time at all.

Creating a single successful PPC campaign can be done by anyone, but delivering results time and time again is something else. Being able to consistently produce campaigns that achieve results in an ever-changing industry is the difference between amateur and professional Pay-Per-Click management.

“Recently, we’ve noticed an increase in the number of sitelinks created with the same landing pages or the same content. So in the coming month, we will begin more proactive enforcement of our existing policy. Initially, we’ll focus on new and recently changed sitelinks. As your ads are being served, our systems will verify that your sitelinks meet the policy standards.  Sitelinks that don’t meet the standards will be restricted from appearing.”

If you would like help updating your sitelinks please let us know.